We are dying to introduce you to Diane Chaudouet…

How we met?
Annie: We found Diane through a very dear friend who is a highly regarded and knowledgeable art collector. It has been a very exciting journey connecting with Diane and we feel especially lucky to have the opportunity to show her work and our open house is the first opportunity of seeing her work in the UK.  Her beautiful images are printed onto aluminium which gives each piece another dimension as the light bounces off and the colours are reflected.

What was the trigger that got you into art?
Diane: I didn’t really get into art officially until I decided lately to show some works and share them with an audience. I didn’t describe myself as an artist. I always used material of my everyday/periods of life to make something with. It was not a premeditated production, it was more a way to be in the world.

What inspires you?
Diane: The light and the colours or compositions of the nature. a lot of kind of beauties.

What about the creative process excites you the most?
Diane: I like to explore, deepen, expand while going in the detail.

Are there any artists who have influenced you over the years?
Diane: Not intentionally but I am always interested in the work of former and present artists.

How have you developed your style as an artist?
Diane: With the years, with the practice. Traverses and then Eigenlicht have been my only projects, with the strict meaning of a methodical work. But I photograph a fashion model the same way as a ruin or a tree.

Finally is there something you can’t live without in your studio?
Diane: I spend every day with my camera.

DIANE  CHAUDOUET (1987, France) is a self taught photographer who deepens different areas around the  image. She puts herself personally at stake to understand and feel the ins and outs of her researches. Her last works were shown inter alia in la Galerie Cosmos, Paris, and in la Maison de la Photographie, Lille. She is currently living in Berlin.
Diane arrived in Berlin in 2010.
Diane: I photographed alone over one year many abandoned places which I visited regularly. Because I developed my relationship with each one of these locations over the months, I thus could tame them, and detach myself from their strength to concentrate on the details. I also could see them exposed to the seasonal fluctuations. furthermore, although these places are qualified as abandoned, I noticed the life they still shelter. 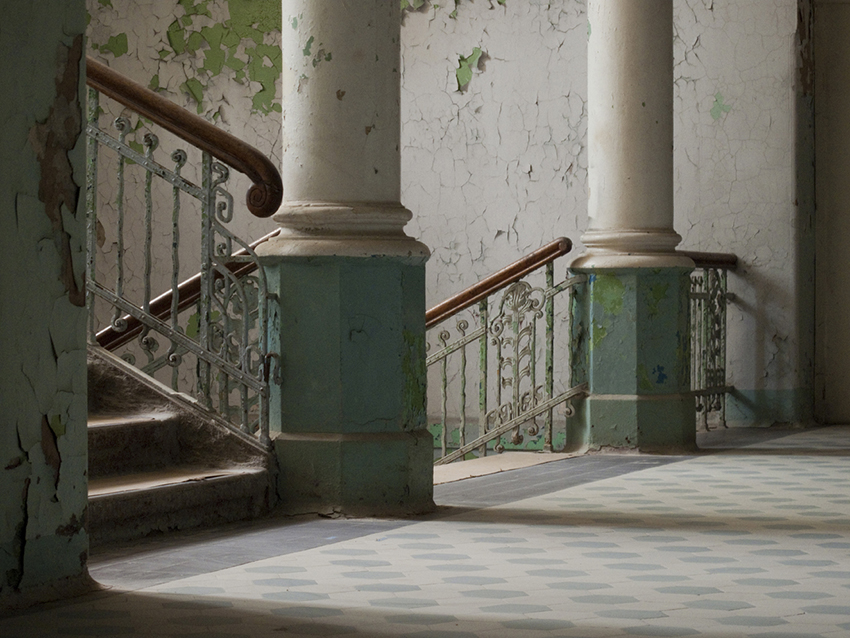